With Selzy, each plan has its billing period during which you send your emails. To switch to a different plan after the billing period is over, just go to the Plans section and choose your next plan by clicking on the respective button. 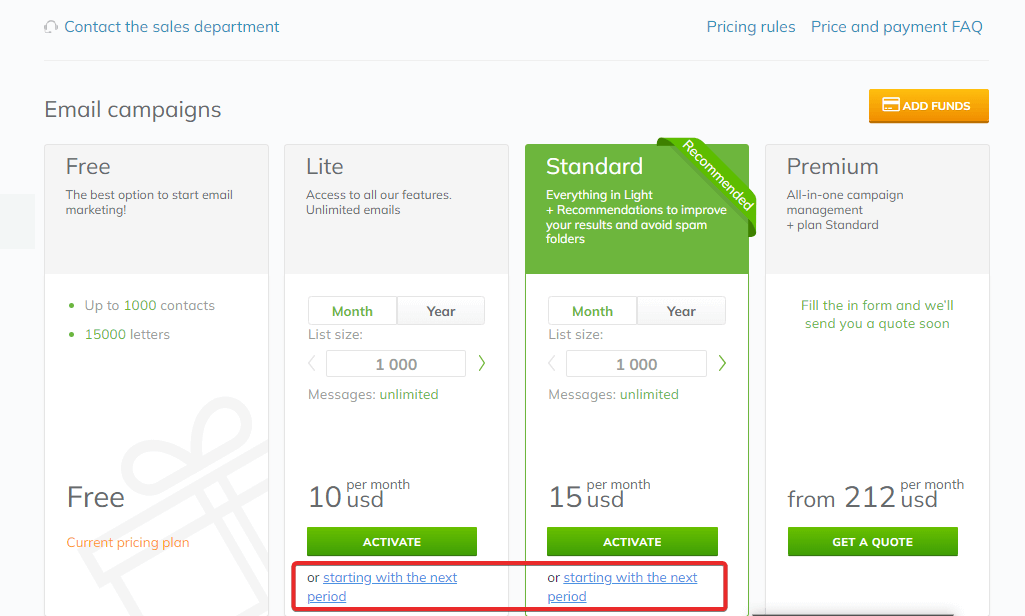 To switch to a different plan before the end of the billing period as well, you should meet certain conditions. In Selzy, we have pricing plans based either on the number of emails or the number of contacts. You can switch to either group differently.

More about the plans we have

With Free, you can switch to a different plan of your choice at any time.

You can’t downgrade to a Lite or a Standard Plan before the end of the billing period.

If you upgrade to a Lite or a Standard Plan, the unused part of your current plan will return to your balance. The amount returned is proportional to the number of days passed.

NB! When you switch to Pay as You Go, Pre-paid Credits, or Free, the payment for the current period is not returned. As in the case when you switch from Lite to Standard and vice versa.

The plan can be activated and deactivated only by Selzy managers.

To do this, leave a request at the Services page of the website or in the Plans section of your account.

NB! After the billing period, your unsent emails expire. The bonus emails are not prolonged to the next period.

It works like this to prevent users from accidentally switching to a different plan and losing the paid package.

Pay As You Go Plan

If you switch from a Pay As You Go Plan to a different one, its new period begins.

Did we answer to your question?

More articles in «Pricing and Payment»