There are a number of ways businesses can recognize Juneteenth in a way that shows substantive support both now and in the future.

As awareness of the holiday continues to grow, we want to help you understand how your business can celebrate it effectively through email campaigns.

What is Juneteenth and why is it important?

Juneteenth commemorates the day when Union soldiers arrived in Galveston, Texas in June 19, 1865, and announced that the war was over and all slaves were free. This holiday is also known as African-American Emancipation Day or Freedom Day. It is the oldest nationally celebrated commemoration of the ending of slavery in the United States.

In a symbolic nod to the growing movement for racial justice, in 2021 president Biden signed a bill making Juneteenth a federal holiday. Today, Juneteenth is celebrated in the United States as a day of emancipation and freedom. Companies and organizations across the country hold events and special promotions to mark the occasion.

Last year, many companies were going above and beyond to show their support for Juneteenth. And major corporations like Apple and Facebook were giving their employees the day off to observe the holiday. Several large companies, including Amazon and General Motors, sponsored Juneteenth events to promote unity. These events featured musical performances, speeches, and other live shows.

Businesses have a unique opportunity to show their employees and customers that they’re committed to equality and racial justice by making Juneteenth a company holiday. It is an occasion that offers many opportunities for effective email marketing campaigns.

As Juneteenth is a significant day for the African American community and the rest of the American population, it is important to be respectful when celebrating and participating in the holiday. There are some email marketing best practices to show that you are one with the Black community.

Take a day off from ads

During Juneteenth, the best marketing strategy is to refrain from marketing altogether. This allows Black Americans to celebrate without feeling like they are being exploited or taken advantage of. By taking a day off from ads, companies can show their respect for this important cultural holiday and demonstrate their commitment to inclusion and diversity.

Juneteenth should be about celebrating, learning, and creating a greater understanding of the Black freedom. Rather than trying to sell products, companies should use this day as an opportunity to amplify Black voices. Your email might look like this: 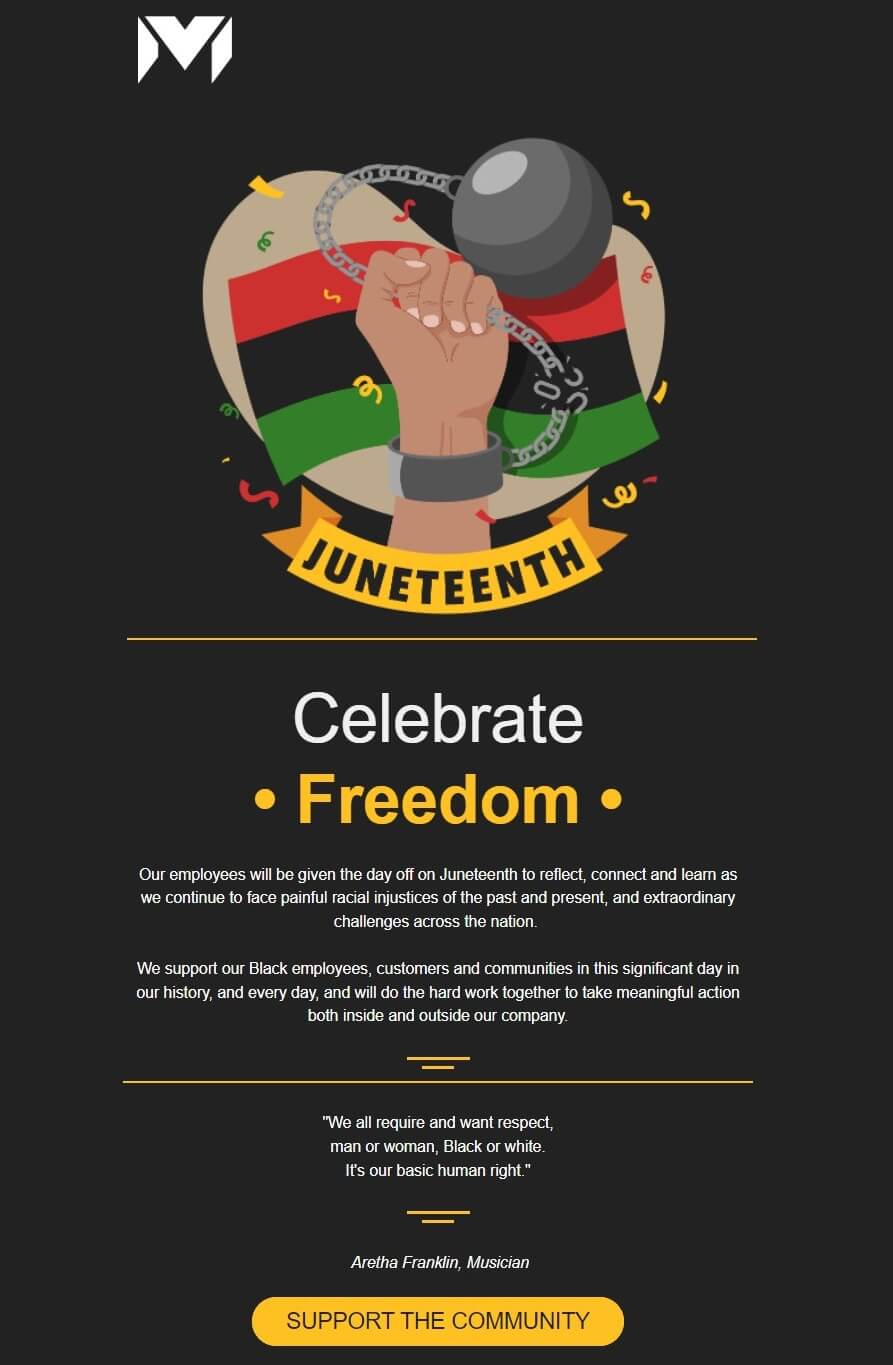 Remember the power of storytelling in email marketing. Stories have the ability to connect us on a personal level and remind us of our shared humanity.

Since not everyone is aware of the history of Juneteenth (as it has only been celebrated on a large scale in recent years), bring awareness to the holiday by sharing its significance with your audience. Start a conversation about why it’s important to celebrate Black culture. This will help create a more understanding society. 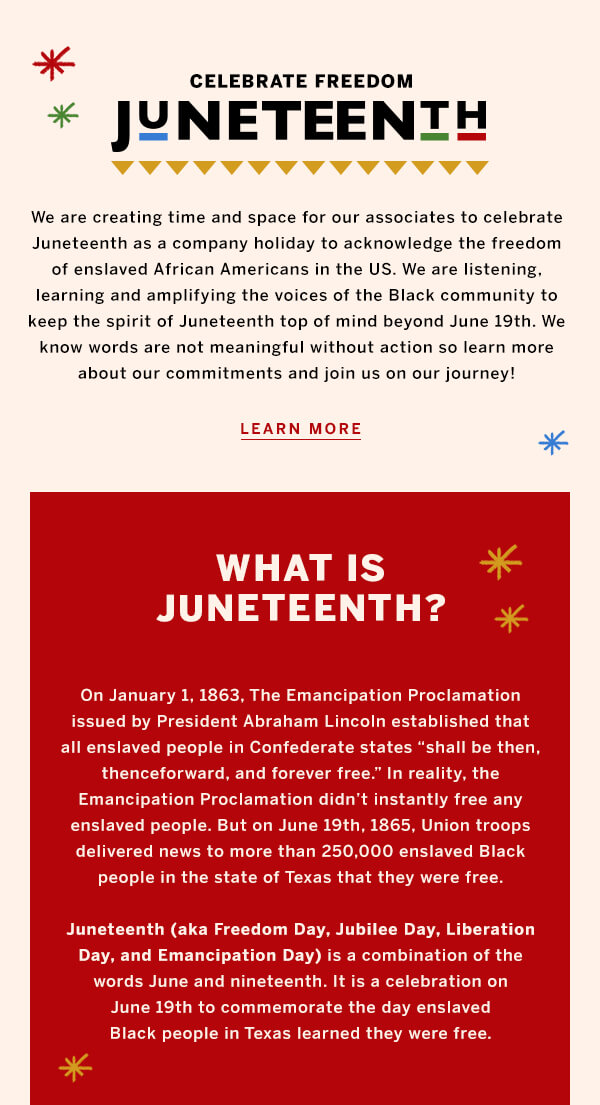 Collaborate with organizations that impact the lives of Black Americans

There are many organizations that focus on the empowerment of Black Americans. Find one or two that you can partner with to help promote their message through your email marketing. Not only will this help to serve your community, but it will also show your customers that you’re an organization that cares about more than just selling products.

For example, Tapestry INC (the parent company of Coach) has demonstrated active allyship by taking the Active Allyship Pledge and working with HBCUs (Historically Black Colleges and Universities) to promote talent and development within the Black community. Through these types of efforts, businesses can build genuine and meaningful relationships with members of the Black community, helping to build trust. 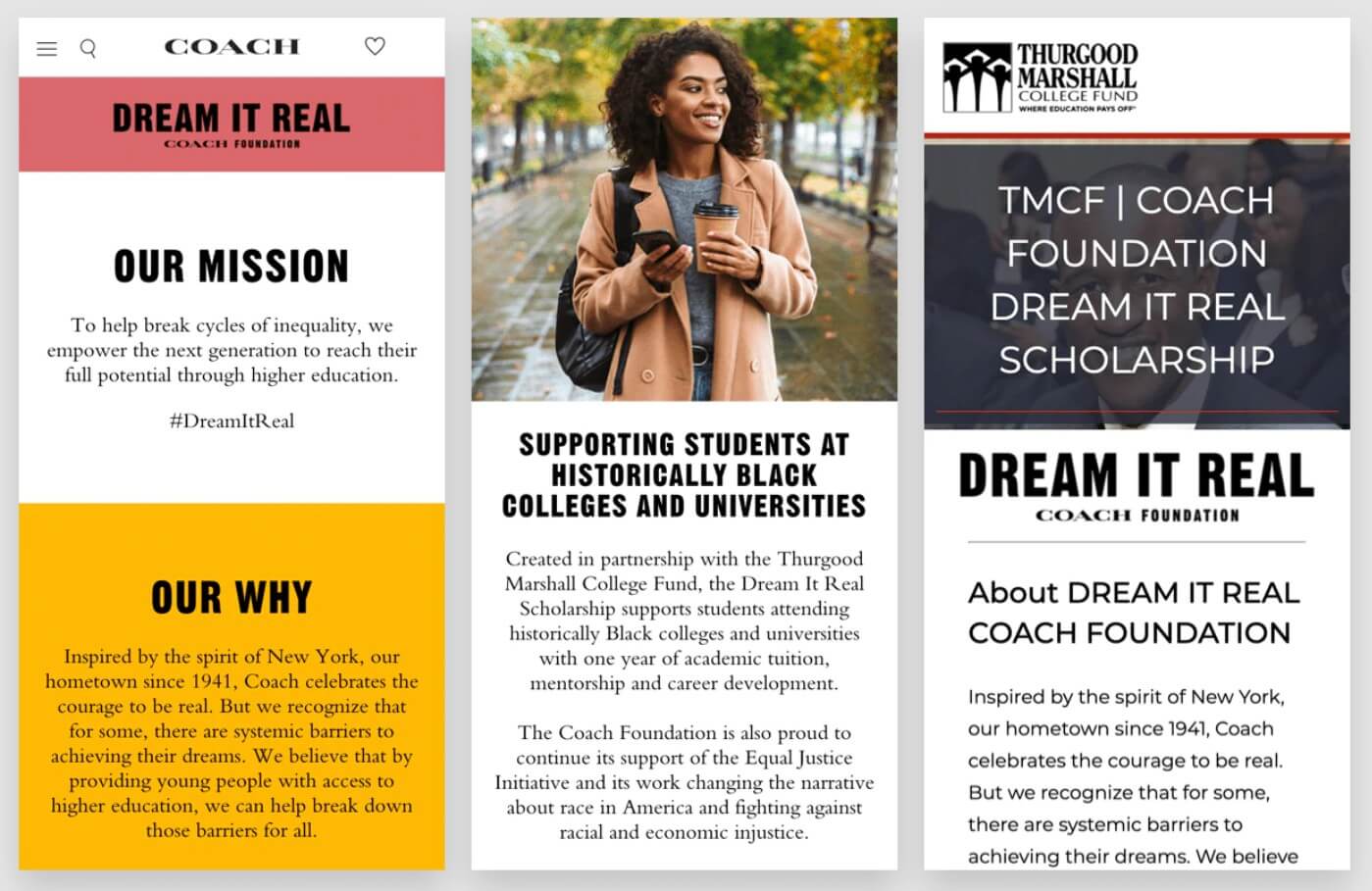 You could also use this day to show support for Black voices, businesses, and community-led organizations. This would be a great way to show your solidarity with the Black community and help promote equality. By leveraging your brand’s position, you can help raise the visibility of these businesses and connect them with new audiences.

If you want to focus your email content strategy on promoting Black voices, consider sharing emails from Black historians or influencers, articles written by Black authors, and information about Black-owned businesses.

A great way to support Black-owned businesses, creators, and community-led organizations is to host an event with a Black influencer or community leader in your industry. Promote this event through email and social media to help spread the word: 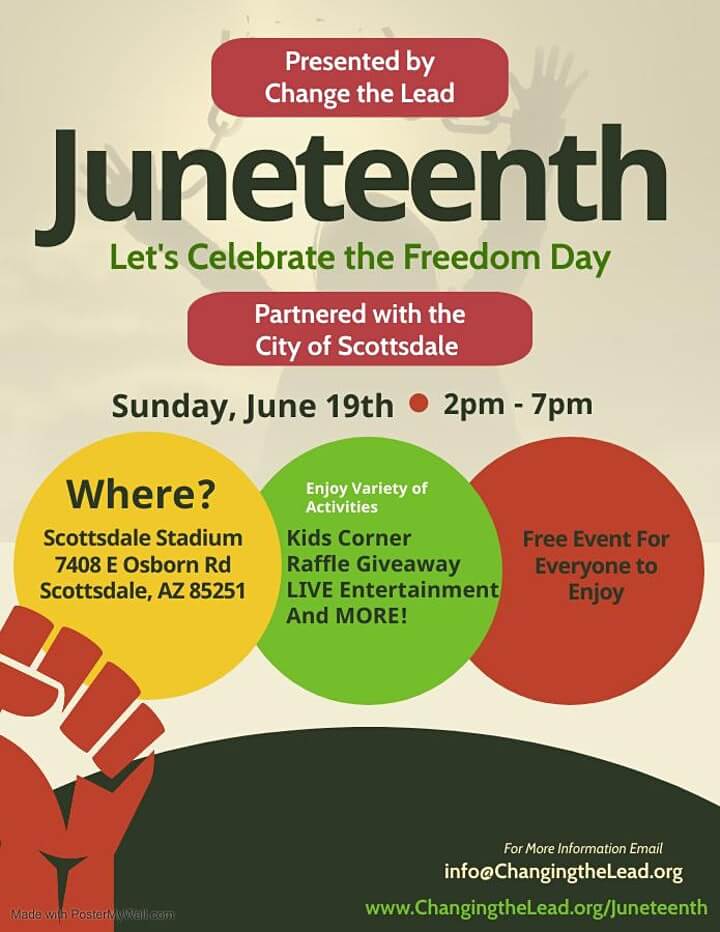 Use hints of red, green, and black in your designs

Use the red, green, and black colors in your Juneteenth graphics to represent the Pan-African flag — a powerful symbol of freedom and unity for all people of African descent. 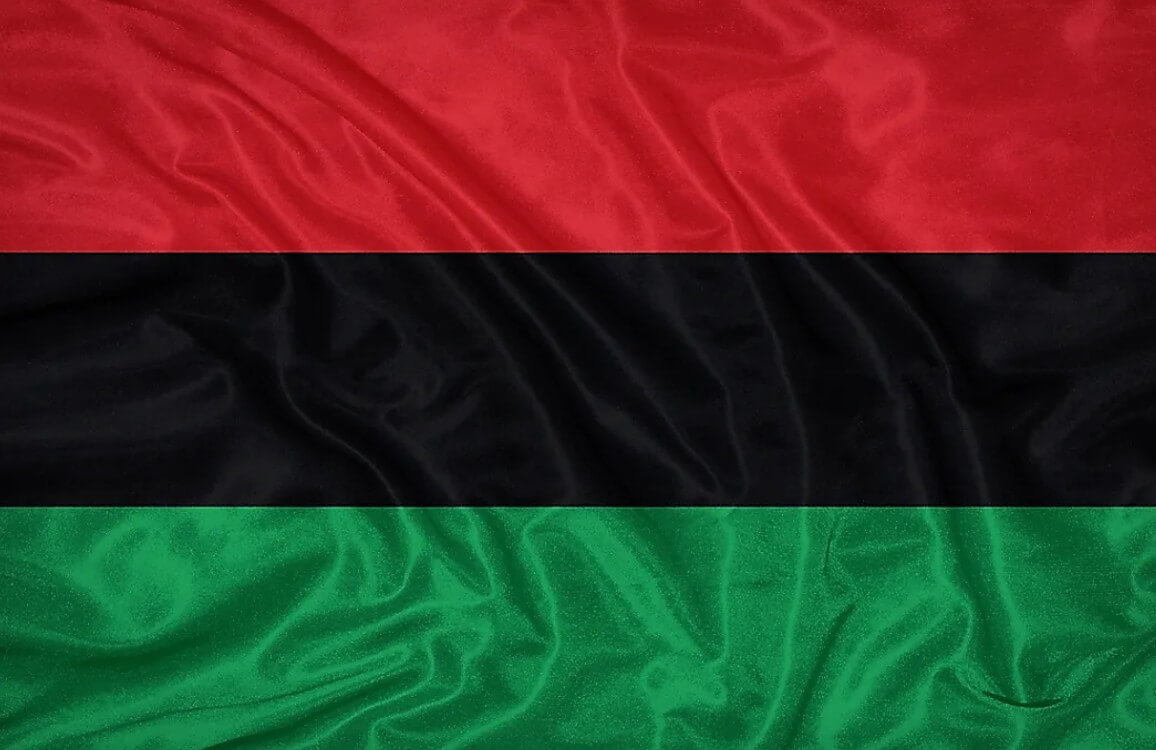 This Juneteenth, take some time to integrate these colors into your email campaigns as a way to show solidarity with the African Diaspora. Even if you normally stick to your brand colors, this is a great opportunity to experiment with some new hues.

Juneteenth should be seen as an opportunity to connect with your audience and raise awareness about issues related to racial equality. Communications during the Juneteenth month should include regular or recurring topics related to the holiday. Some possible topics for the Juneteenth email might include:

Many organizations are wondering what the most appropriate Juneteenth email subject lines might be. While there is no one-size-fits-all answer to this question, make sure your subject lines and content are culturally sensitive and respectful. Here are a few suggestions to get you started:

Best Juneteenth email examples to get inspired by

Juneteenth offers email marketers a unique opportunity to connect with their subscribers on a personal level.

To help you get started, we’ve put together a list of some of the best Juneteenth email examples from around the web. The brands mentioned below are sending powerful messages that celebrate Black culture and honor the history of this important day.

Aftershokz sent an email to celebrate Juneteenth and to amplify the voices of Black people in their community. They included a link for following individual contributors who shared what Juneteenth means to them. By helping grow their following, Aftershokz helps keep these voices heard long after the email is sent. They kept the focus on the holiday and the people, rather than on their products. 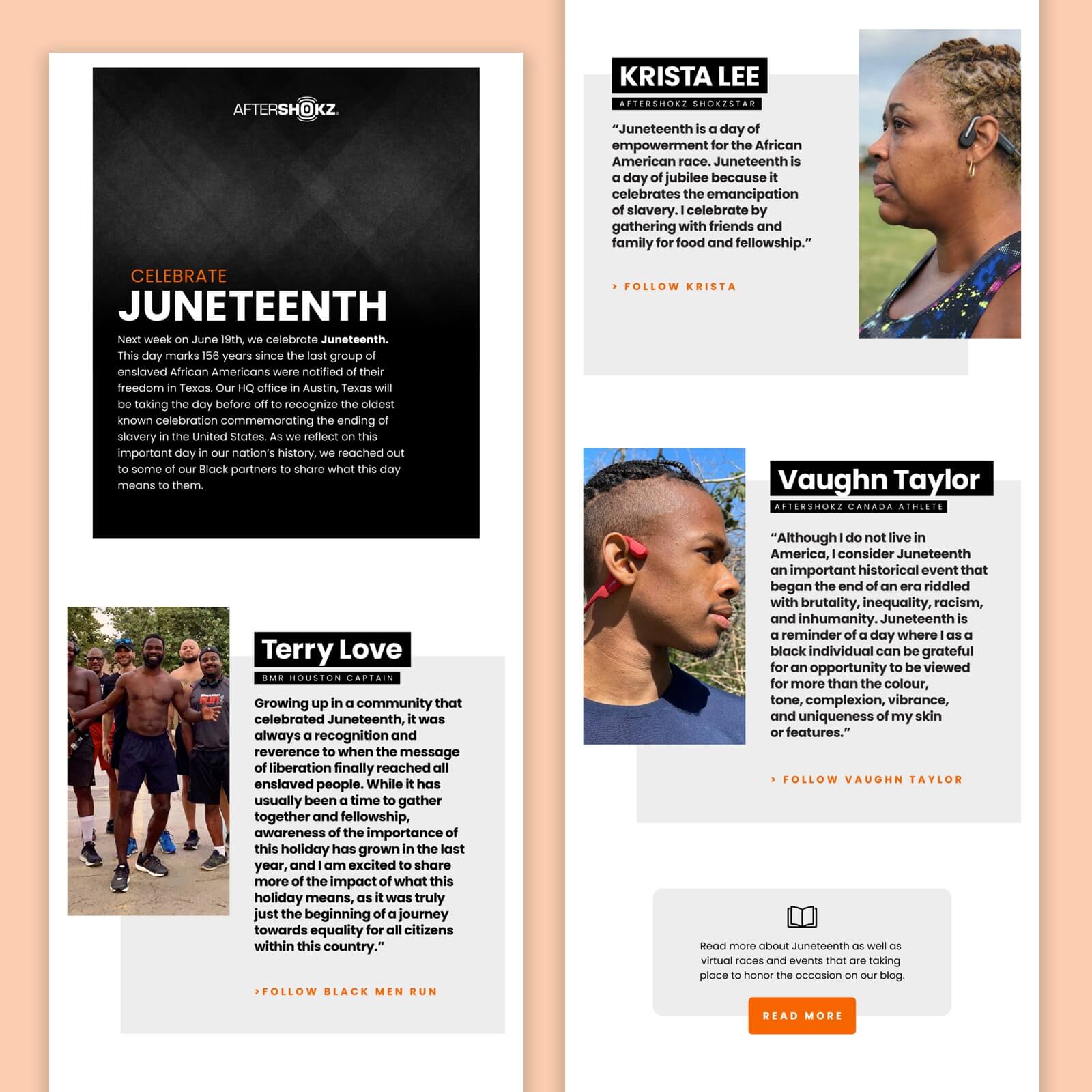 In honor of Juneteenth, Primary has created an email campaign that educates readers about the holiday and its significance. They have also amplified the voices of the Black community by sharing links to blog posts with stories and perspectives from Black writers and thinkers. 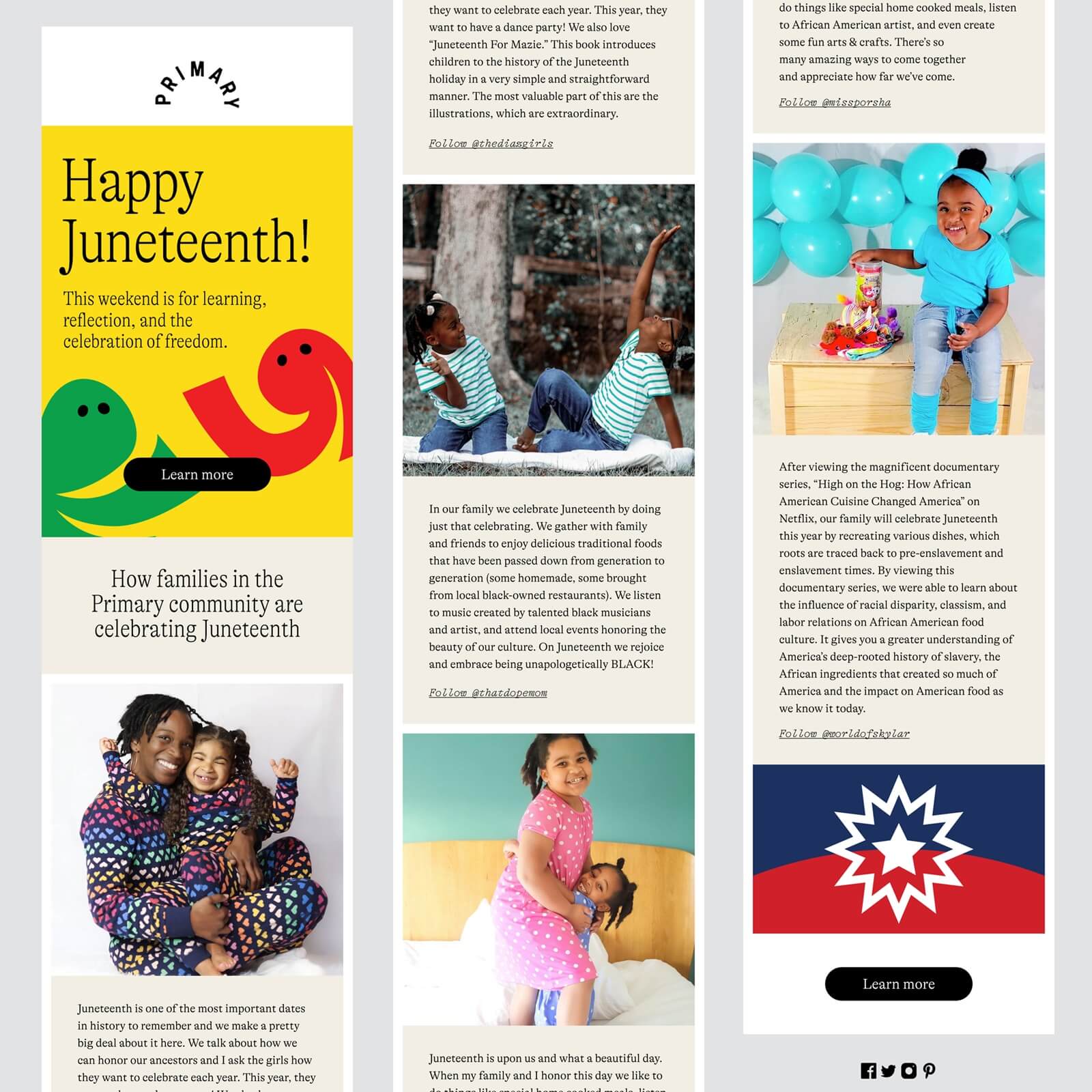 The Little Market is a company that supports vulnerable communities by raising awareness about social justice and inequality. They strive to make a difference in the world through their platform. By supporting this company, you can help make a positive change in the world.

In its email, the company tells about the history of Juneteenth and encourages everyone to take action.

For many Black people, Juneteenth holds a great deal of meaning. It is a day to remember the past, reflect on the present, and take action for the future. The Skillshare company spoke with three Black creatives and teachers to learn more about their thoughts and experiences surrounding Juneteenth. Through these conversations, they gained a better understanding of what this holiday means to them and how we can continue fighting for racial justice. The company shared these thoughts with its customers via email.

In its email, Ashley Stewart emphasized how proud they are to partner with The Juneteenth Foundation. They used the techniques of email marketing for nonprofits and stated that all proceeds from the sale of the tees would be donated to the foundation. 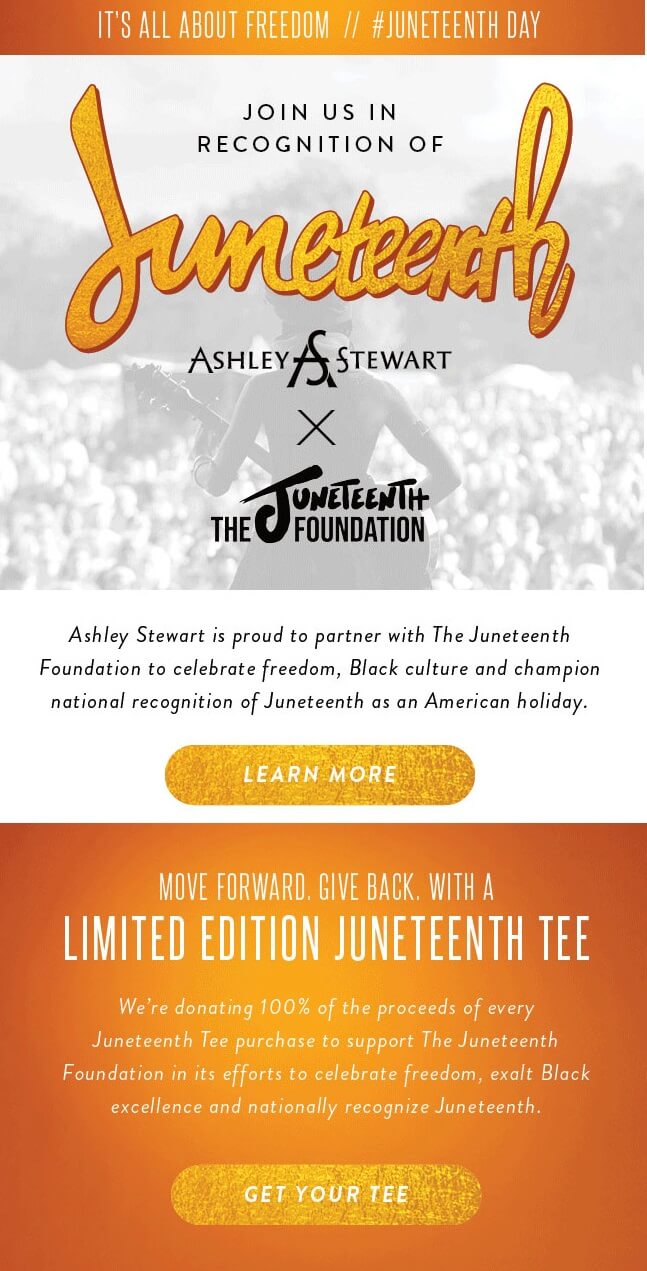 These are just a few examples — we encourage you to get creative in how you celebrate Juneteenth with your email list! What matters most is that you show your support for the Black community and take a stand against racism.

On Juneteenth, also known as Freedom Day, African Americans celebrate the end of slavery in the United States. This holiday is about more than just freedom from oppression, it’s also about celebrating Black culture and unity.

This year, take some time to learn about Juneteenth and what it means for Black Americans. Here are some best practices for Juneteenth email campaigns you can use to get started:

Use Juneteenth as an opportunity to connect with your audience and raise awareness about issues related to racial equality. Let this Juneteenth be a day of reflection, learning, and celebrating African-American culture.

Any other ideas on how to celebrate Juneteenth?

Tips and Tricks An Ultimate Guide to Email Marketing Campaigns

Starter Kit CAN-SPAM: Understanding the Requirements and How To Avoid Penalties for Non-Compliance

Inspiration How to Start a Business at 50+: 7 Inspirational Entrepreneurs Share Their Experience

Others just make a list of ways. We actually explain how to make the most of each way.

21 surefire ways to grow your email list with detailed explanations and hand-picked examples. Based on research and 10+ years experience in email marketing. 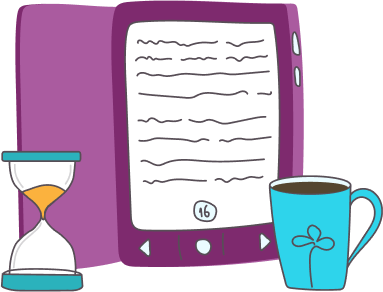 The Foolproof Guide To Email List Building
Subscribe to our email marketing digest and get 21 actionable strategies to grow your email list, with detailed explanations and hand-picked examples.

✓
Thank you!
Check your email — the guide is on its way to your inbox.